In summer and in winter there is always a good reason to get into the carriage, even for practicing sports. From Valtellina at high altitude to St. Moritz, through spectacular sceneries 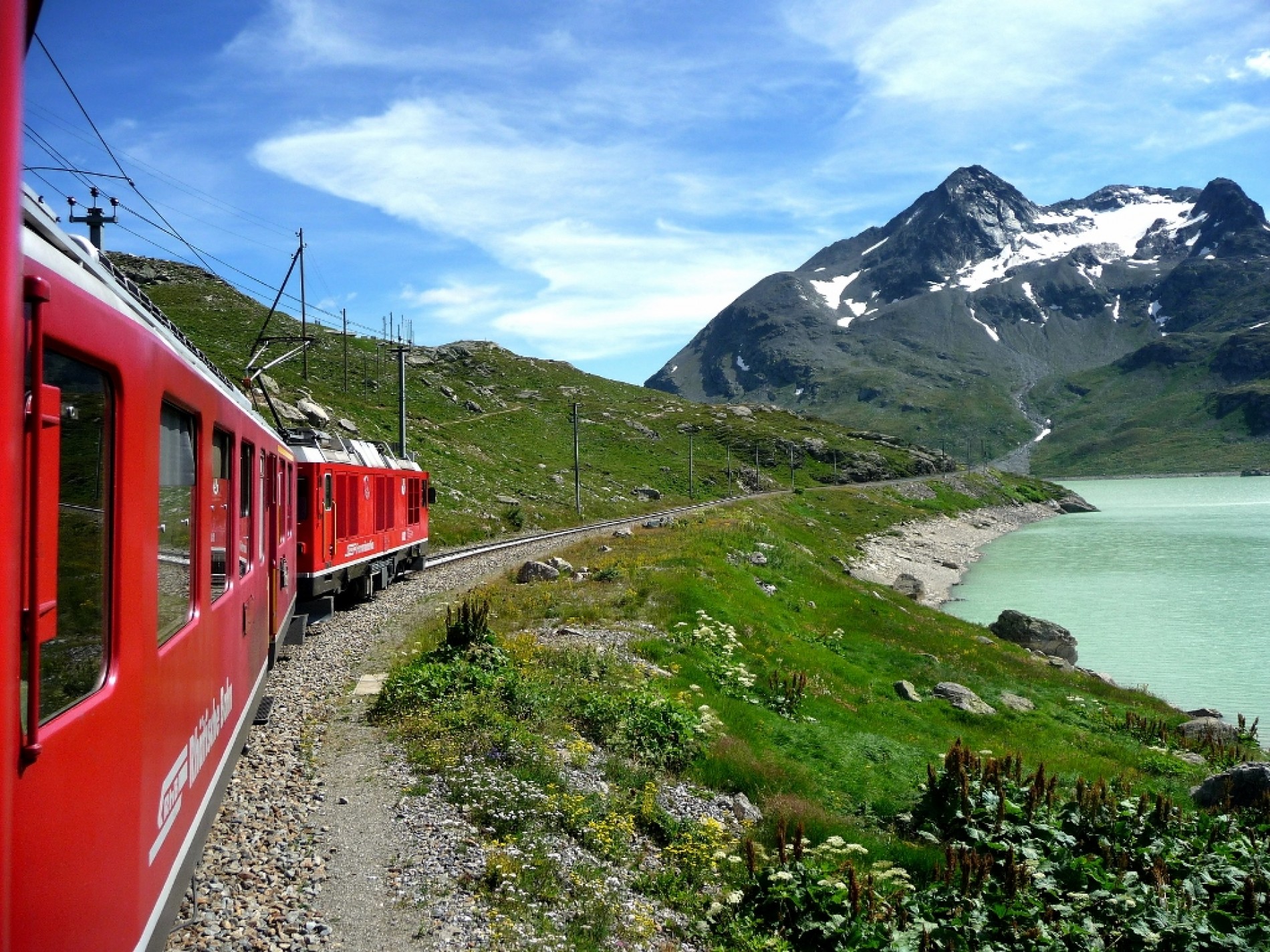 ON THE RAILWAY AT HIGH ALTITUDE

It's not just a simple connection between Italy and Switzerland, it is an adventure through wonderful mountains with unique characteristics: it is the highest alpine axe in Europe and one of the steepest railways in the world. It is no coincidence that since July 2008, the Retica’s Railway has gained the recognition of Unesco World Heritage Site.

It starts from 400 meters in Tirano, Valtellina, not far from Sondrio, and you reach Saint Moritz, Engadine Switzerland, crossing almost 200 viaducts and bridges with slopes up to 7% without rack.

A few kilometers after leaving the station of Tirano, the train already pass by a marvel: the helical viaduct of Brusio. After Poschiavo, capital of the valley with its beautiful patrician houses, it reaches Alp Grüm (2,091 m), an exceptional panoramic point.

After the pass of Bernina, it offers to the travelers a view of the imposing Morteratsch Glacier and the Bernina mountain group, with its four thousand meters of shining eternal snow. After few kilometers you reach St. Moritz, famous mountain resort background to rich homes and starting point for Engadine and its lakes, where many sports can be practiced. 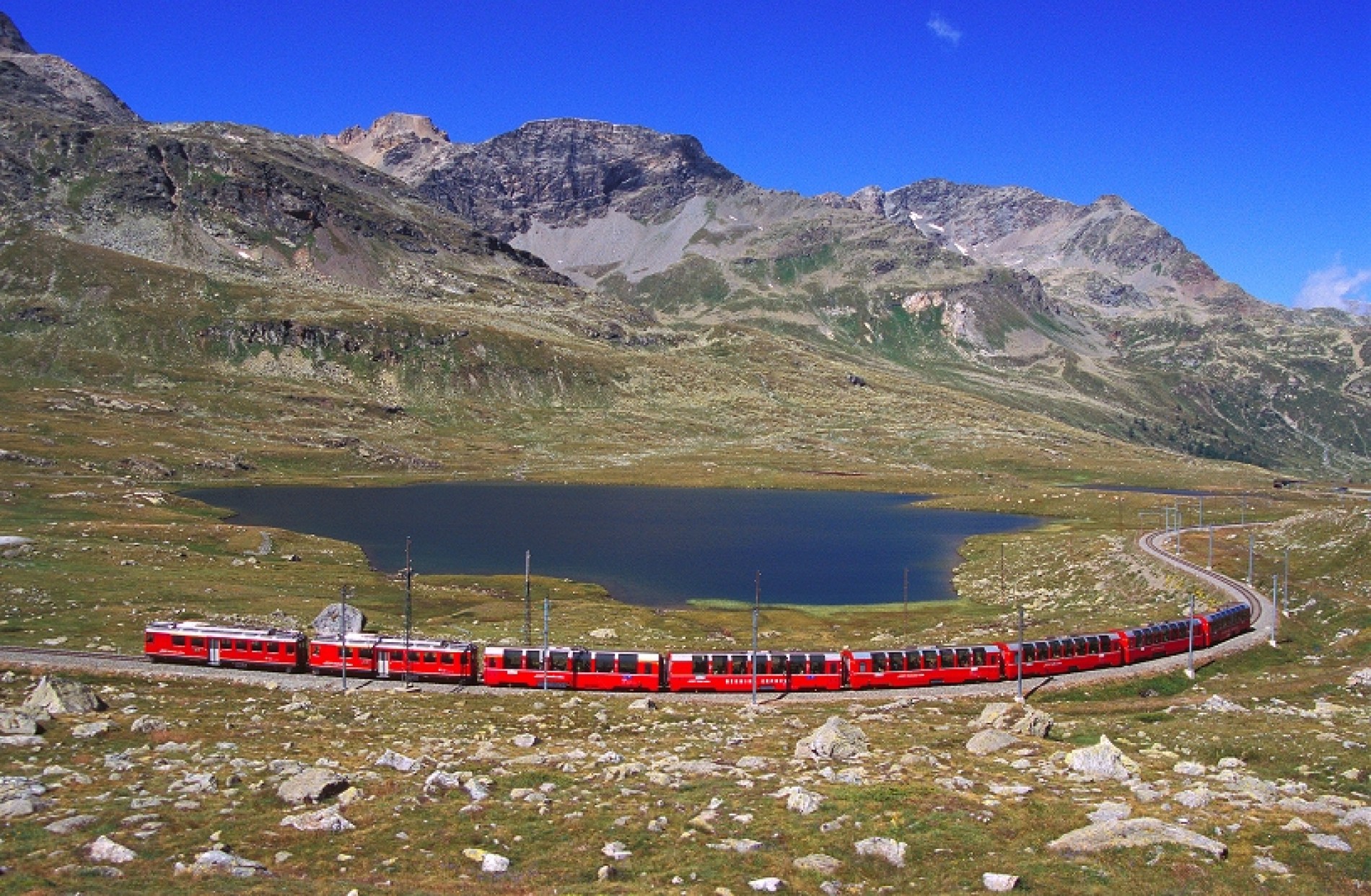 UP AND DOWN THE COACHES

Along the way there are 21 stops. Here are some suggestions:

Cavaglia - 500m away from the station there is the Glaciers Garden, within walking distance along a well-marked trail. It’s about spectacular formations, also known as "giant’s mufflers", it’s the result of an impressive natural phenomenon: through millennia, rocks and sand have carved and polished the mountain, pushed by the water of the glacier. Mufflers, emptied of water and debris, now appear in the most strange and bizarre shapes and they are a true natural treasure. They can be admired only from May to October. Free admission, guided tours available, booking compulsory.

Alp Grum - It 'a small station located at 2,091 meters high. Many described it as the most spectacular stop of the Bernina Red Express, thanks to the viewpoint overlooking the Palù glacier and the Valley of Poschiavo. In winter it is an impressive backdrop. In spring meadows reborn and lakes, whose waters change color depending on the weather, are fed by a dozen waterfalls descending from the mountains. At the station, there is a restaurant with a panoramic terrace and a small guest house.

Hospice Bernina - Arriving near this station, under the Cambrena glacier, there is the incomparable view of two sparkling lakes. On one side, the dark Lej Nair flowing north, on the other side, the milky Lej Alv or White Lake, which has a white color because it is fed by the snows and glaciers that melt and it has a backdrop of rock and sand. Even in winter, even if everything is frozen, you may notice a difference in colors. The Bernina Hospice stop is about at 2,300 meters above sea level: it’s the highest station of the Retica’s Railway and coincides with the pass known as the Bernina Pass.

Already in the nineteenth century, when the pass was crossed with pack animals, here used to stood a hotel - the Bernina Hospice in fact - where they did the horses changing and they used to take a break with a hot meal. The hotel-restaurant is still there, right next to the station.

Morteratsch - Nestled between the Bernina's peaks there is the glacier Morteratsch. Just in front of the station, starts a nice flat path that allows you to get in an hour and a half (with the kids something extra) to the Bernina glacier and enjoy a wonderful view. You can do it in winter too, with snow. If necessary, you can stop for lunch at the hotel-restaurant, located behind the station. In summer, a visit to the dairy Morteratsch is worth, it produces mountain cheeses in the traditional way.

GET ON THE TRAIN... DOING SPORT

Sports activities that can be practiced:

The Bernina Express is not only a beautiful and romantic tourist attraction, but also a "sport train", with the many outdoor activities that the Bernina express makes accessible along its rails, between Engadine and the Grisons’ canton. From hiking to mountain biking, to skiing during winter, but also water sports and horse riding.

- Bike: The Bernina Express can sometimes carry bicycles too, with special coaches in service on some trains. This makes possible the tough ascent to the Bernina and the access to trails and roads in Engadine, either for road bikes and for big tires with 400 km of paths just in Engadine (five bikes’ lifts), to which you must add 30 different tours in Davos and 10.000 meters of difference in height on marked trails. The more adventurous ones can get off the Bernina Express in Poschiavo.

By bike and on foot you can travel on the new path in the Minore valley that links the Bernina Hospice, in Swiss territory, to Forcola di Livigno Pass (2,315 mt) and it develops at a constant height above two thousand meters. A path is 5.8 kilometers long and 180 meters of elevation gain and can be covered in 50 minutes by mountain bike.

- Trekking: You can get off the train anywhere and enjoy unforgettable walks, even in winter with snowshoes. In Valposchiavo the offer is huge. For more info: (http://www.valposchiavo.ch/it/attivita/inverno/passeggiate-invernali.html)

- Horse Riding: St. Moritz is one of the most quoted center for horse riding in the Alps, with several stables and hiking activities to choose from. (http://www.engadin.stmoritz.ch/sommer/it/attivita/avventure-alpine/escursioni/equitazione/) 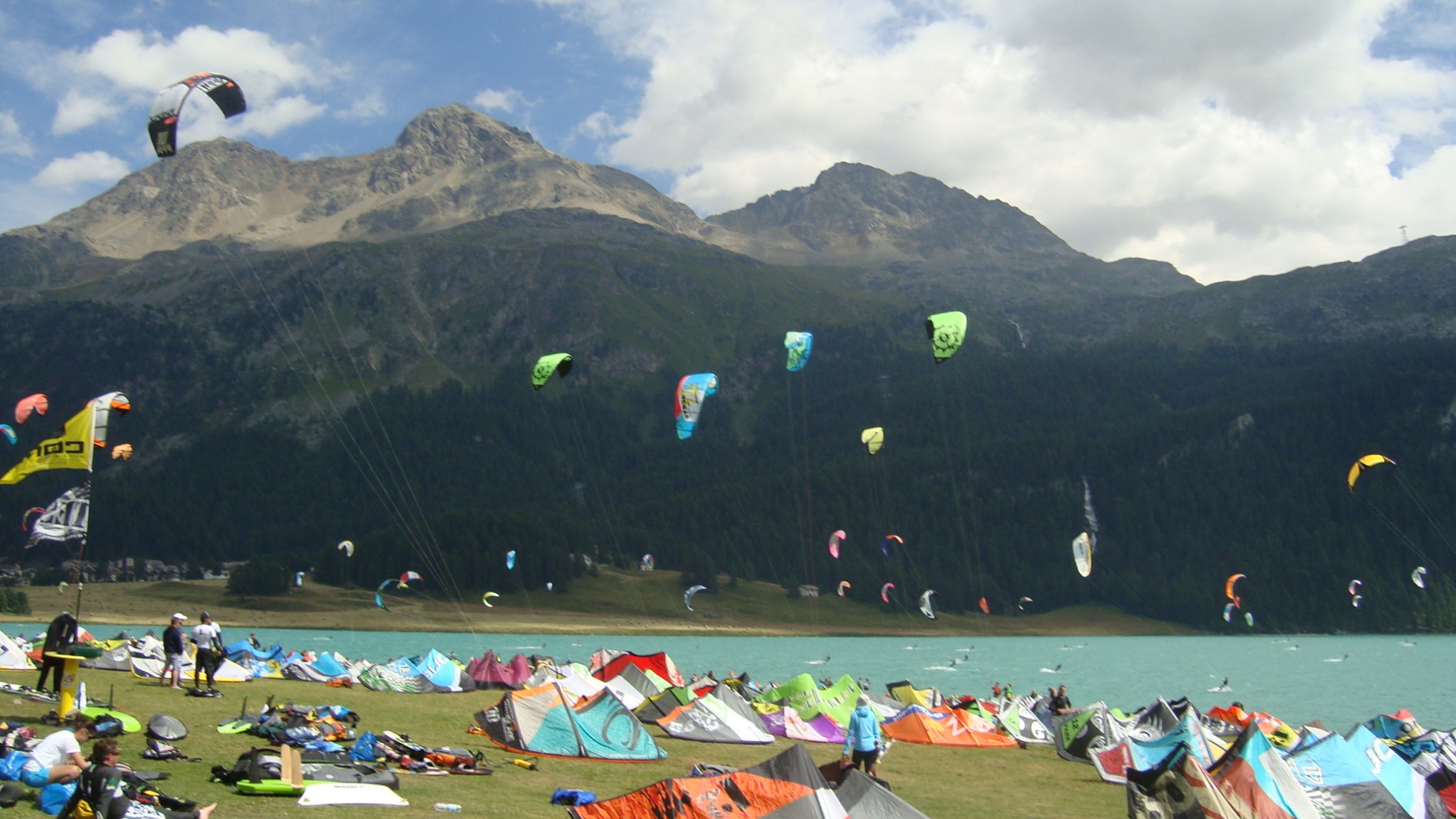