On the trails of witches

Walking with snowshoes through the snowy Sarentino Valley. Venture into the land of the “Stoanerne Mandln”, the ‘stone men’, discovering all their secrets 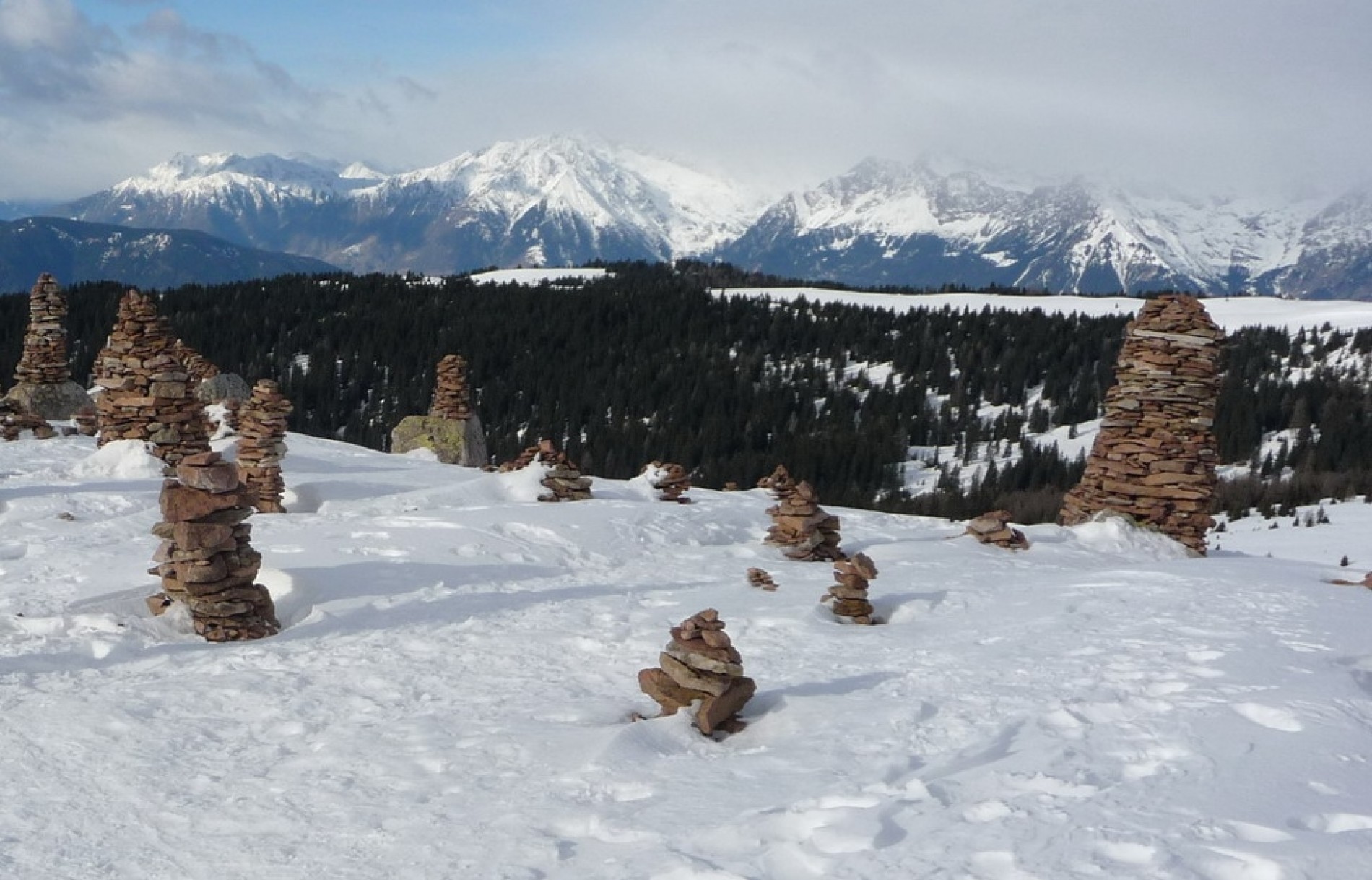 LEGENDS AMONG THE STONES

In Sarentino Valley, just a few kilometers from Bolzano, there are some ancient statements that still today nurture the fantasy of all visitors.

On top of a grassy hill, at 2000 meters in altitude, are located the Stoanerne Mandln, ‘stone men’  translated in local dialect. These stone pillars are often taller than a person.

You can find these structures also in other areas of Alto Adige because they usually serve to mark the mountain’s paths. But here the atmosphere is a bit different…

In other ages, these ‘stone men’ would be considered like a shepherds’ pastime, except that, on some of them, have been found a lot of engravings dated to the Stone Age and Middle Ages. The most ancient and less-visible engravings show us that it was an important Pre-Christian place of worship.

During the Middle Ages, religious superstitions and several legends about this place were born. From then on, the Stoanerne Mandln became protagonists of all the stories that were told around a fire during the night. Children and adults pointed out the mountain like a secret refuge for the witches, in which took place satanic rites and black magic.

Today, if you want to reach this place full of mystery, you just have to go by car from the village of Sarentino to the ‘malga Sarner’. From there, an easy trail surrounded by the forest will bring you in altitude in the middle of a little valley. Indeed, this trail is so easy to be suitable during all seasons.

When it’s covered with snow, for example, it can be a perfect destination to all enthusiasts of snowshoes.

Ascending from the ‘malga Sarnen’, in about one hour walk, you can arrive to the ‘malga Auner’ and then to the ‘Auener Joch’, which is a very wide mountain pass that allow you to go through the Venosta Valley. Walking for another half an hour you can reach the “stone men”. They are located on the top of a small hill, surrounded by a vast upland. Once you reach it, it’s time to admire a beautiful landscape.

One of the itineraries that allow you to fully enjoy this place is the one that goes from the Stoanerne Mandln to Auener Joch and then goes through fir’s forests, until reaching the ‘Voraner Alm’ and then going back to Auener Joch. And if you still have a bit of energy, you can run along the crest of the mountain and admire another great view on the top of the Karkofel, a big hill located in front of the Stoanerne Mandln’s one.

I’m sure you’ll be impressed from the grandness of the view on the Sarentino Valley.

At the end of the tour, maybe you would like to taste a bit of local speck of Sarentino Valley at the Auer Hof restaurant, that is located just in front of the parking in which you left your car before to start the tour.

The impression that I experienced was like if the time was slowing down. These simple ‘creatures’ have been built from people that lived about 3000 or 4000 years ago: if you touch them with your hand it seems to being able to establish a symbolic contact with this people and their connection with the nature.

The Stoanerne Mandln have survived after thousand years and now they obtained a great value and a kind of ‘energy’ that you can feel being close to them.