ART TREKKING IN ROME: Academies in the modern way

Fourth stage of the art-trekking in the Capital. The "Wink of Rome" makes a tour through the pictorial beauties of Roman Academies, among French masters and contemporary art

ARTISTIC TREKKING IN VIA DEL CORSO

Here's another terrific contemporary art trekking together with The Wink of Rome, taking advantage of these magnificent Roman October days and deciding whether to go on foot or by bike, according to your tastes.

Leaving Fori Imperiali (Click here for the third stage: "From Piazza Venezia to Constantinople") and starting from Piazza Venezia, the itinerary runs for about two kilometers in Via del Corso, which constitutes the famous 'Trident' with Via del Babbuino on the right and Via di Ripetta on the left, converging in Piazza del Popolo, the ancient commercial entrance to the city.

It is in the second half of the 15th century, under Pope Paul II, that Via del Corso acquires greater importance thanks to the pontiff’s intuition to enhance the path of the ancient Via Lata, using this artery not only for commercial transport from Piazza del Popolo and the port of Ripetta, but also as a place to organise religious and playful events, the races of the famous Roman carnival and of the Barbary horses, from which the road takes its name.

There are therefore numerous buildings, both noble and worship places, that arouse along this path over time.

The Wink of Rome is expected to celebrate the Academy of France, in Viale Trinità dei Monti, at the famous building of Villa Medici, where several events are taking place for the 350th anniversary of the Academy in Rome. Many the music events, projections, debates and meetings and, of course, exhibitions.

In the middle of Via del Corso, on the right side, we find Via dei Condotti, an ancient street, today famous especially for the Italian and international fashion boutiques, which brings us to Piazza di Spagna, with its beautiful staircase and the 'Barcaccia' by Pietro Bernini, father of the famous Gian Lorenzo.

We cross the square and since we have to 'climb' to reach the destination, we obviously do not take the elevator, but we continue our cultural trek at full speed, choosing to face on foot Via di S. Sebastianello.

Alternatively, we could also have been able to travel the superlative Staircase, by the architects Specchi and De Sanctis, inaugurated for the Jubilee in 1725, finally arriving in Trinità dei Monti, where De Chirico had his own studio (it still exists) and where there is the Home Museum of the nineteenth-century English poet John Keats. 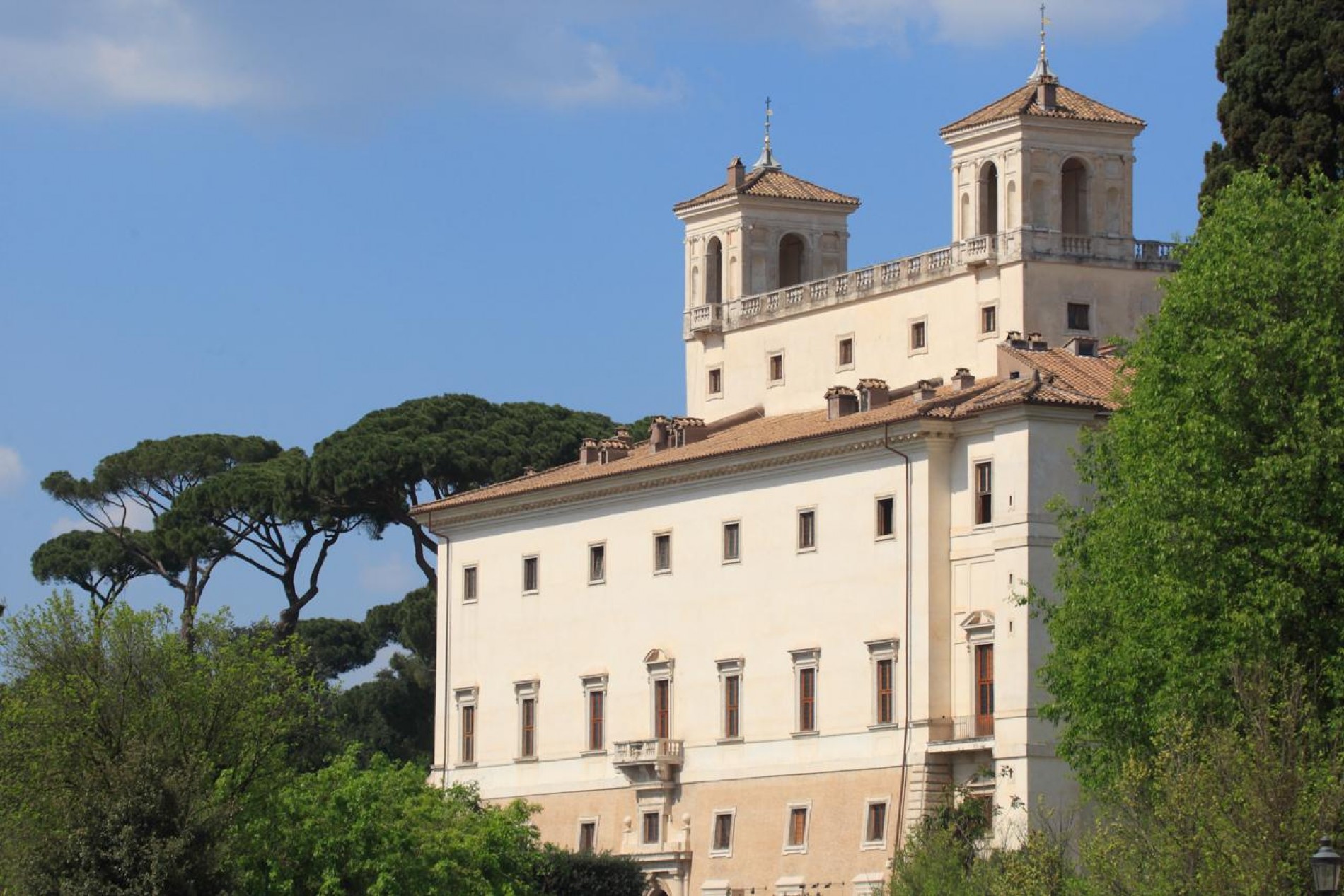 350 YEARS OF THE ACADEMY OF FRANCE

Arriving at the top of the hill we find ourselves in front of the majestic Villa Medici, where we are welcomed by a special atmosphere. After the inner staircases, we enter one of the halls of this wonderful Renaissance villa, which has a breathtaking view on Rome: this is, in fact, the highest point of the city, to admire through the large windows of this frescoed and decorated building.

On the occasion of this anniversary we get acquainted with the formidable director of the Académie de France, Muriel Mayette-Holtz, the first woman to direct the prestigious institution, and with a personality of artist, actress and director. We are presented the catalogue and illustrated the project of the exhibition "350 years of Creativity" (Curated by Jérôme Delaplanche), which traces the history of the academy, founded in 1666 by Louis XIV.

The exhibition at Villa Medici has just been inaugurated (14 October-15 January) and you cannot really miss it. It is an exhibition of synthesis works on the creative activity of artists and scholars, as well as directors, who have stayed and worked there in these centuries. 1,944 figures have succeeded: among the prominent ones who directed the Academy of France we find the painters Ingres and Balthus and many others who have studied or stayed at the Villa producing valuable works, including famous masters such as Debussy and Boucher.

About 100 are the exhibited works of great artistic value, produced from 1666 up to now by personalities like Fragonard, David, Berlioz, Garnier, Carpeaux, Debussy. A fascinating journey capable of carrying visitors through three and a half centuries of French art.

The extreme quality of the studies of male, rather than female, nudes leap to the eye, in coal, sanguine and gouache of Renaissance memory (David and Fabre), the architectural designs in gouache or watercolor and the oil paintings in large and medium format with portraits, religious and epic themes (Girodet-Trioson), as well as historic. All supplemented by some beautiful sculptures, including some by Janniot belonging to the late 19th century.

WANDERING THROUGH THE ROMAN ACADEMIES

The project is also accompanied by two other exhibitions organised by the National Academy of San Luca and the Academy of Fine Art of Rome on the relations between the French institution and the two Roman academies.

And The Wink of Rome decides to pay a visit.

Leaving the Academy of France we reach Via Ripetta on foot where, at the so-called Horseshoe, we find the ancient Academy of Fine Arts of Rome, still active in the didactics of higher-level and specialized arts, masterfully directed by the art historian Tiziana D'acchille (again, the first woman to do so) and by the president Mario Alì.
Here we come to the beautiful exhibition "Accademia-Accademie. Research, transmission and artistic creation in the XIX-XXI centuries", curated by Marco Bussagli, Sarah Linford and Pietro Roccasecca, open to the public from 24th November to 15th January 2017.

Continuing south, towards Fontana di Trevi, we finally arrive at the National Academy of San Luca, inside the Palazzo Carpegna, founded by Federico Zuccari in 1593 as an association of painters. Here there is a beautiful exhibition of the collection (the scientific responsible is Francesco Moschini), with paintings, drawings and extraordinary terracotta high-relief from 17th to 18th century.

Ultimately, today's stage to the discovery of Roman academies treasures is just a 'nice tour’, to live perhaps on an intense day kissed by the Roman sun. Nourishing yourselves on art, while making healthy trekking, or cycling, in the hustle and bustle of the city between shops, boutiques, trattorias and cafés. 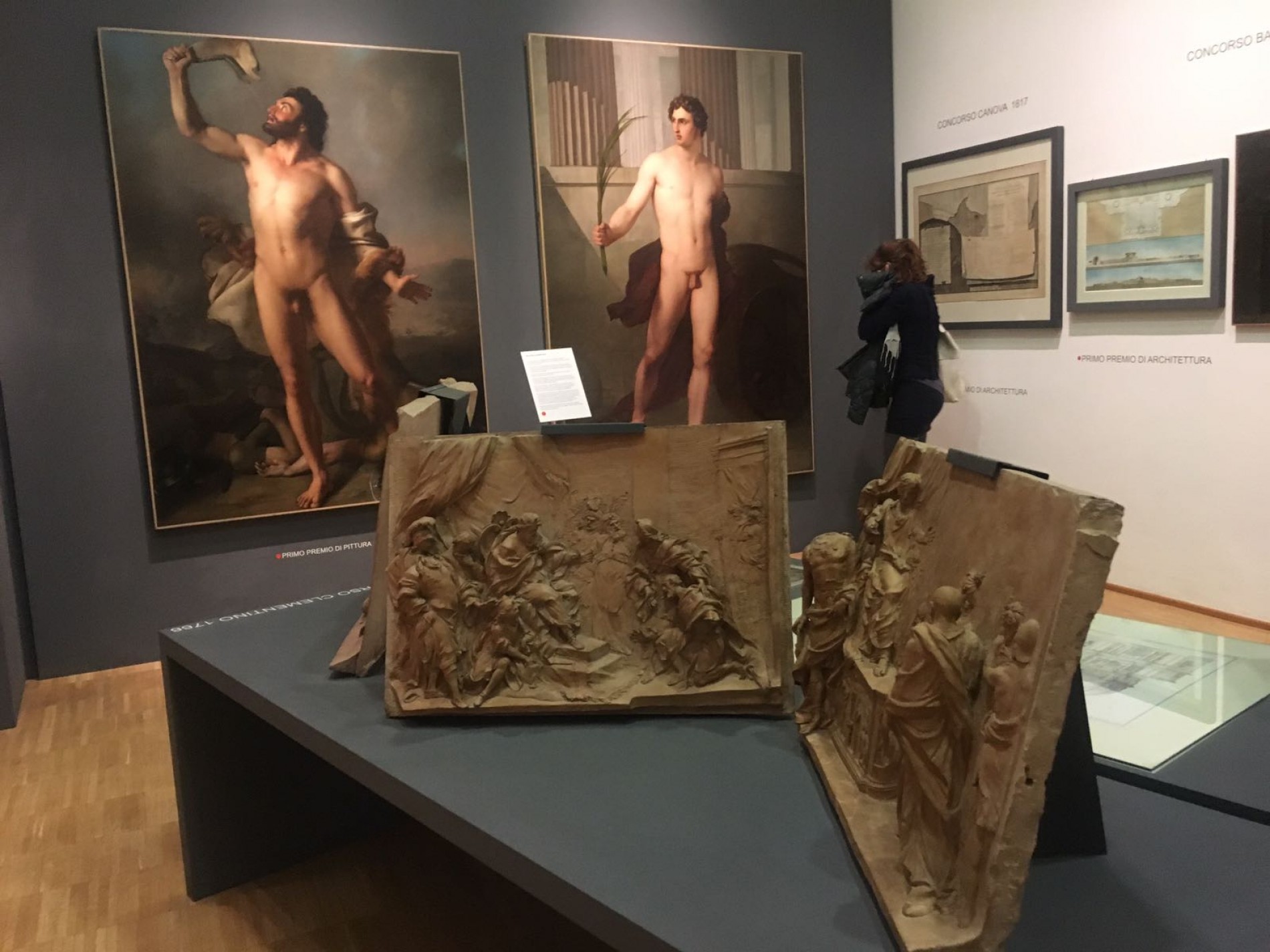