The Italian ski-marathon is coming back this year with a lot of events, famous athletes and passion. The cross-country skiing will make you live great adventures in every corner of the world.

The cross-country skiing represents the other side of the snowy mountain, the one that doesn’t know crowds or queues at the ski lift.

It was born in the nordic countries as a hard and lonely activity, but soon it conquered also Italy. And today, with the Marcialonga of Fiemme and Fassa every cross-country skier can participate at one of the main long-distance competitions. To be able to say, at least once, “I was there”.

This competition has been launched for the first time in the seventies, thanks to four friends (Mario Cristofolini, Giulio Giovannini, Roberto Moggio and Nele Zorzi) who wanted to bring also on the Dolomites all the beauty of the legendary Swedish Vasaloppet; the Marcialonga became soon very popular: at the debut, organizers were expecting only one hundred participants at the competition, but at the end one thousand arrived. From then on, it continued to grow and enchant everyone, attracting thousands cross-country skiers and spectators.

The 42nd edition will come back, as always, the last Sunday of January (25) and it will see 7.700 participants sliding on the snow of the Dolomites of Trentino: from Moena along the two tracks 46 and 70 kilometers long, until the “light” finish line of Predazzo and the historical one of Cavalese.

Sport and entertainment, for one of the most popular ski marathon of the world, which is part of the Worldloppet - the International Federation that brings together all best long distance cross-country skiing events - in every corner of the planet: from the Valleys of Fiemme and Fassa until Tartu in Estonia, from Sweden to Japan.

It is a circuit of events that every year attracts 100.000 participants, and that, this year for the first time, it will present smaller events such as Vasaloppet China, Merino Muster, Marcha Blanca & Ushuaia Loppet and Fossavatn. In this way, the Nations joining the Worldloppet “family” are now China, New Zealand, Argentina, Iceland, Australia, United States, Canada, Japan, Poland, Switzerland, Russia, Czech Republic, France, Austria, Germany, Estonia, Norway, Finland, Sweden and Italy.

The first trial of 2015 has been the Vasaloppet China, followed by the Jizerska Padesatka in Czech Republic and the Dolomitenlauf in Austria. Now is the turn of our Italian Marcialonga, which will include a long list of important people like Giorgio Di Centa - famous athlete of the Italian cross-country ski - which will start the competition together with specialists of long distances such as:  Østensen, Aukland, Dahl, Svaerd, Ahrlin, Lukas Bauer, Tord Asle Gjerdalen, Thomas Alsgaard, Anders Soedergren and Johan Kjølstad.

And for those who won’t be able to participate, there is still a good news. The Marcialonga trail has been also recognized as a touristic one, and it will stay opened until the beginning of March, for the happiness of all cross-country skiers who find in Fiemme Valley a paradise for this kind of sport. The trail is accessible paying a daily duty of two euro and  the two cash machines for the entrance ticket are located in Ziano di Fiemme and in Masi di Cavalese (under 14 and owners of the FiemmE-motion Winter Card and Super Nordic Ski Pass enter for free).

At the end, during the weekend of the Marcialonga there will be a lot of events dedicated to families, tourists and enthusiasts of the history of the cross-country ski (like the vintage appointments with the Marcialonga Story, the Minimarcialonga, Marcialonga Stars and Young).

On Sunday 25th, the ski marathon will be broadcast live on Rai Italia and will be show in a lot of other Countries like Norway, Sweden, Denmark, Baltic States, Russia, Czech Republic and even Greece. 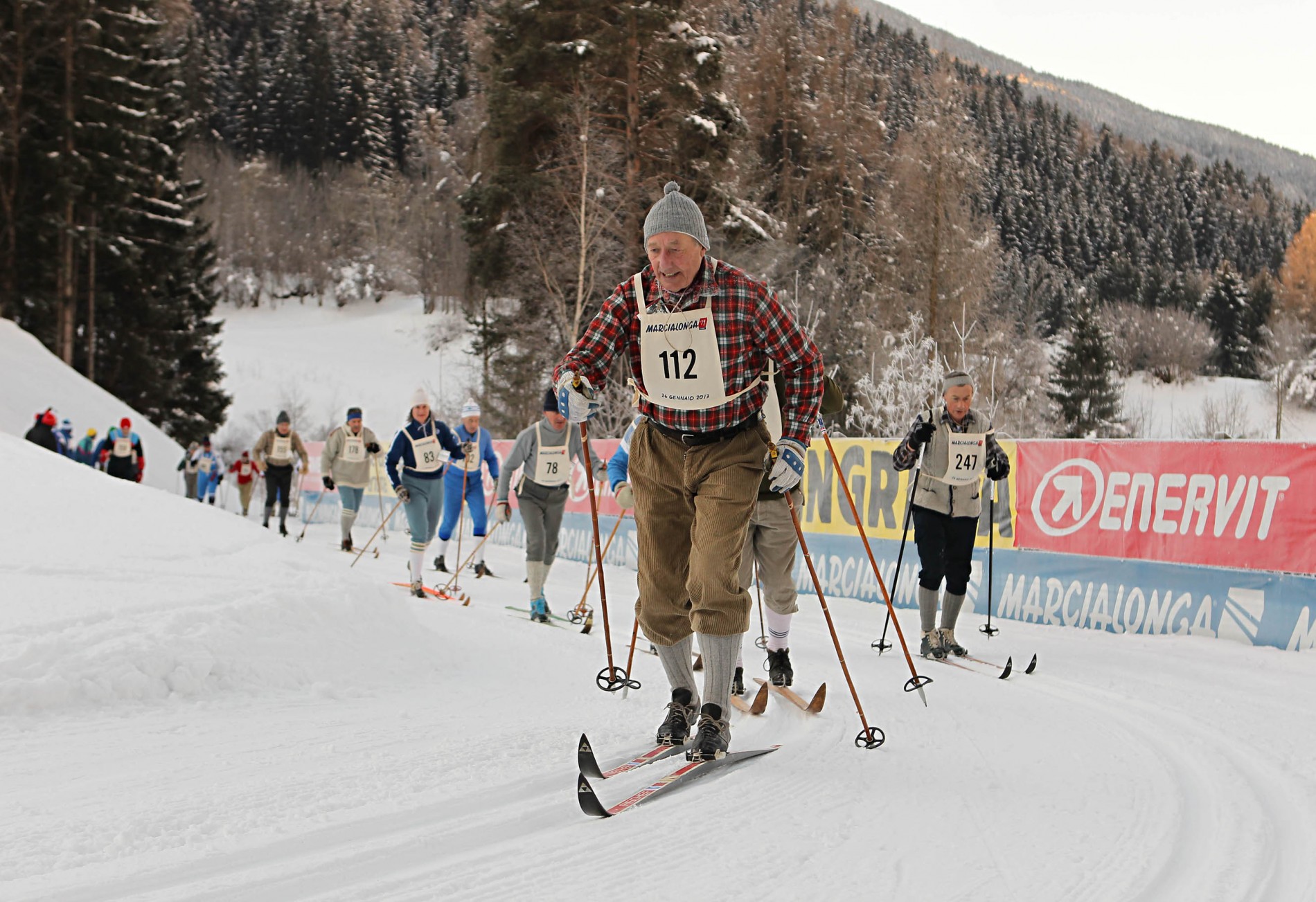